What Are The Factors That Make The Brake Pads Sound?

We learned from the Alpina Brake Pad Manufacturer that the brake pads are mainly caused by human factors and product factors.

1. Disassemble the original car film and replace it with a new one.

2. The surface of the brake disc is flat but a new piece is installed and it sounds.

A: The first reason may be that the repairman put the brake pads on the side. When removing the brake pads, you can see that there are only some traces of friction on the surface of the brake pads. Treatment method: It can be removed and reinstalled.

B: The second reason: At present, the size of the friction pads of the same type of brake pads among domestic manufacturers is inconsistent, especially the width of the friction pads. The size deviation between manufacturers can reach up to three millimetres. This causes the surface of the brake disc to look smooth, but if the brake pads of large size are installed on the brake discs that have been rubbed by the small brake pads, they will also sound. Treatment method: first CD, if not CD can drive for a period of time, after the traces match, it will not sound.

C: The third reason is that it suddenly sounds after driving for a period of time. This is mostly due to the hard objects on the road such as gravel and iron scraps caught on the brake pads when the brake is pressed. This situation not only sounded, but also easily hurt the disk. However, when removing the inspection, sometimes foreign objects have fallen off or worn away. Handling method: CD-ROM, if there are foreign objects on the film, they should be removed and then installed. In this case, it is easy to see that the wound is just one of the four surfaces of the two disks. However, if the driver is not explained, it is easy to incur claims. 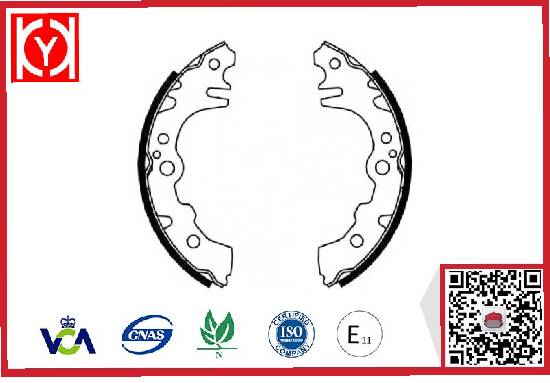 D: It sounds after driving for a while. But it wasn't squeaking, it was rattling, which might be caused by loose attachments on the brake pads. Treatment method: re-tighten or replace with a new piece.

The sound referred to here refers to the sound when the surface of the brake disc is completely smooth and flat. The reason is that the current national regulations prohibit the use of asbestos-containing brake pads, but large domestic manufacturers generally do so, and some small manufacturers are still producing and selling asbestos-containing brake pads. Although the semi-metallic asbestos-free brake pads have a long driving range, which is beneficial to environmental protection and personal health, the material is hard and the asbestos brake pads are soft because of the soft material. This situation can only be replaced by a new film.

If you want to buy the Alpina Brake Shoe and the Brake Shoes Set, please contact our manufacturer.

Next: Do you really know how often the brake pads are replaced?