Today Chevrolet Brake Pad Manufacturer will tell you about the problems that can occur in automobile brake pads.

The ringing is mainly caused by human factors and product factors.

(1) After the original car film is removed for a new one, it sounds.

(2) The surface of the brake disc is flat, but the new disc sounds.

A: The first reason for this may be that the repairman has biased the brake pads. When they are removed, you can see that the brake pad surface has only partial friction marks. Treatment: can be removed and reinstalled.

B: The second reason: At present, the sizes of the friction pads of the same type of brake pads are inconsistent among domestic manufacturers, especially the width of the friction pads. The size deviation between the manufacturers can reach a maximum of three millimeters. This results in that although the surface of the brake disc looks smooth, large-sized brake pads will also sound if they are mounted on brake discs that have been rubbed by small-sized brake pads. Treatment method: first, the disc can be driven for a period of time without the disc, and will not sound after the traces match.

C: The third reason is that it suddenly sounds after driving for a period of time. This is mostly due to the fact that hard objects on the road such as gravel and iron scraps are caught on the brake pads when the brake is pressed. This situation not only sounds, but also hurts the disk. However, when removed for inspection, sometimes foreign objects have come off or worn away. Handling method: CD-ROM, if there is foreign matter on the film, it should be removed and then installed. This kind of situation often hurts only one of the four surfaces of the two discs, which is easy to see. However, if the driver is not explained, it is easy to cause a claim. D: It sounds after driving for a while. But it is not a squeak, but a rattle, which may be caused by loose attachments on the brake pads. Treatment method: Retighten or replace with new sheet.

The injured disc here refers to the injured disc when the surface of the brake disc is smooth and flat. In addition to the foreign matter caught by the brake pads during driving, it is caused by uneven stirring during the production process of the manufacturer. In fact, the hardness of brake discs is not as good as before due to cost reasons. Even the original car brake discs are generally less rigid than before. This causes semi-metallic brake pads to be particularly vulnerable to damage to the disc. As long as it is slightly scratched, the depth of the scratch does not exceed 1mm, there is no need to change the disc, just keep the disc flat and you can continue to use it. 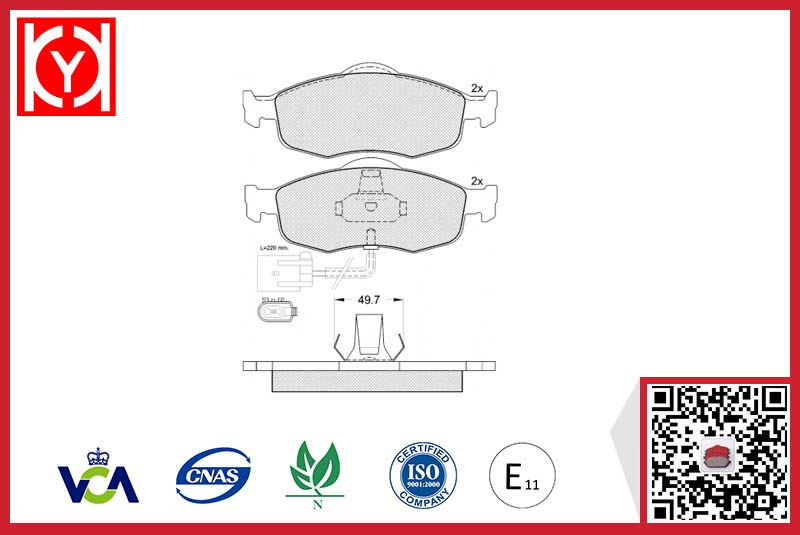 3. Friction blocks fall off or fall off

(1) If the color of the friction block does not change and the slag is dropped, it is a product quality problem. It should be replaced with a new one.

(2) The slag drops off after the friction block changes color.

(1) The new film just installed is the brake failure. This is often caused by the artificial surface of the film with oil and other oils during installation. This is not a product responsibility. After removal, the manufacturer can detect whether there is oil stain or not. Will be responsible, the driver can only change the new film.

(2) The brakes fail after driving for a period of time. Most of this happens when the road area is full of water. Just hit the brakes when passing through a puddle. High-temperature films and discs will harden when exposed to cold water. A hard oxide layer is formed on the disc surface. The surface is hard and the material is normal. White becomes blue or blue-red. In this case, brake pads and discs must be replaced. But it is not a product quality responsibility.

The above are the problems that the car brake pads introduced by Ford USA Brake Pad Manufacturer.

Previous: Why Does BMW Brake Soft After Changing the Brake Pads?

Next: Causes of Cracks in the Brake Pads